Hey Laura! What is Intersectional Feminism?

A listener recently asked me if I had any resources on Intersectional Feminism. There's nothing I like better than curating resources for people who want to learn and grow!

A listener recently asked me if I had any resources on Intersectional Feminism. There's nothing I like better than curating resources for people who want to learn and grow! Note that this list is obviously not exhaustive, and that many of the articles have extra reading lists within them. There are nested opportunities for self-education here. Have fun!

What is Intersectional Feminism?

Feminism = Merriam-Webster defines it as "the theory of the political, economic, and social equality of the sexes, and organized activity on behalf of women's rights and interests."

Intersectionality = the theory was first introduced by Kimberlé Crenshaw, and Merriam-Webster agrees that it's the complex, cumulative manner in which the effects of different forms of discrimination combine, overlap, or intersect. Or, as Jarune Uwujaren and Jamie Utt put it: "intersectionality is a framework that must be applied to all social justice work, a frame that recognizes the multiple aspects of identity that enrich our lives and experiences and that compound and complicate oppressions and marginalizations."

And a bonus term: White Feminism = white supremacy disguised as Nice White Feminists. This way of practicing feminism excludes any experience beyond that of the standard defined by the implicit biases rooted in white supremacy: white, middle class, cisgender, heterosexual, and able-bodied. White Feminism is feminism for white people. Basically, the opposite of Intersectional Feminism. A couple resources below will expand on this. (Again, my take on it.)

Some Primers and Articles to Read

Many people more intelligent and experienced than I have written about this topic. Here are a few that I've curated for you.

Here's a video of Kimberlé Crenshaw giving a keynote on Intersectionality at the Women of the World Festival, in 2016.

Rowan Grigsby's How to survive in intersectional feminist spaces 101 and So you think you know a thing: Feministing 201 There are lots of great resources linked in this article, as well as all the basics for being a good intersectionalist in social justice spaces (and life). This is a white person educating white people; an excellent use of a white person's activism energy.

Cate Young's This is What I Mean When I Say "White Feminism":

Here's Plan A Magazine's podcast episode on Asian Feminism vs. White Feminism - a perspective that often gets lost, as white people like to lump Asians (a "model minority") into whiteness when it suits them.

A Vox Explainer on "The waves of feminism, and why people keep fighting over them."

If you like graphics, this is a fantastic look at how one would (most likely unconsciously) wield one's privilege to oppress others. You can read more about it here. 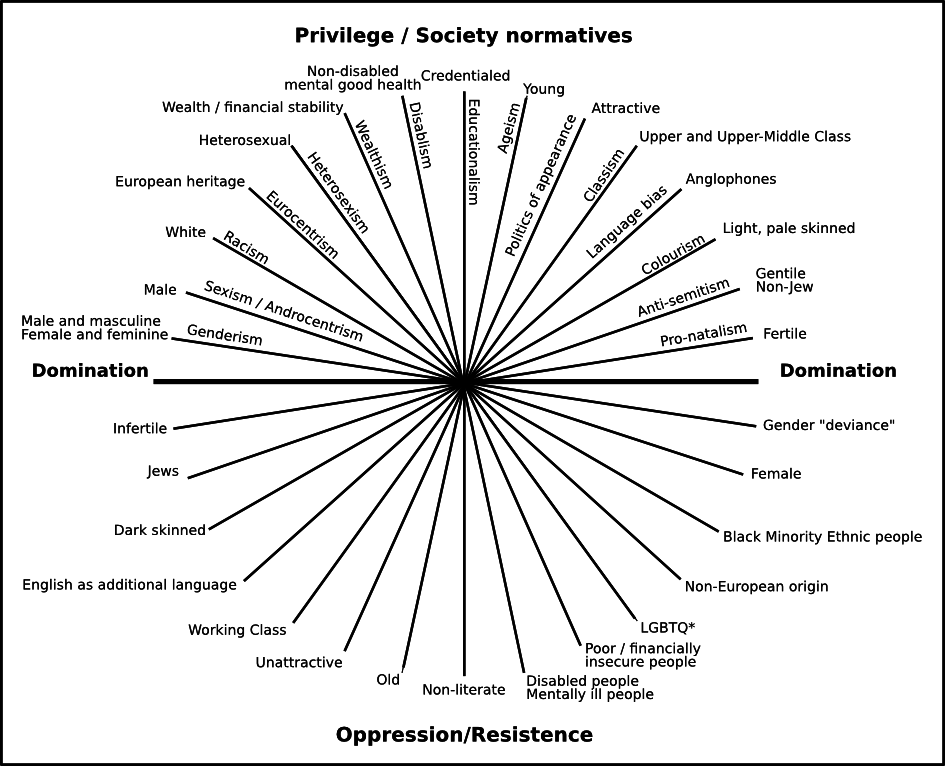